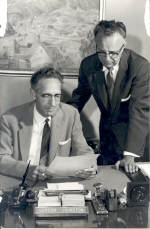 The Library’s name change was part of an agreement worked out between the two schools during the merger. The Sturm College of Law is proud of this rich history and is pleased to carry on the Westminster tradition in its Evening Division, as well as in the Westminster Law Library.